These days most of our life is connected with various social media networks. So in most cases, when you see a hack or tip through those platforms, tries it to check out the result. Though it seems false, some hacks are worthy of testing, and If you get a positive impact, you might be happy. Adele Phillips from Port Talbot in Wales, United Kingdom, also tried something she saw in TikTok.

She saw someone hatching a duck egg bought from the supermarket. So she bought her box of duck eggs and did the same on that video. Thorough out the thirty days with lots of hard work and concerns, finally, she had an adorable little duck by paying off her dedications.

To her surprise, one of the six eggs was fertile. She got everything she needed to hatch it and got to work

As per the interview she had with Bored Panda, elaborate her experience as follows. “I saw it on TikTok. Somebody else had done it with the same ducks except Waitrose; I found them in Morrison’s, the Braddock white ones. I gave it a go, brought them home, put them in the airing cupboard, and bought an incubator from Amazon. I put all six inside and looked up the hatching and incubating process online; I set it to 37.5 degrees and waited ten days to see whether or not they were fertile; you can tell by shining a torchlight into the egg in the dark. It’s called ‘candling,’ and if you see veins by day 10 of incubation, you have a fertile egg, and to my surprise, there was 1 out of the six eggs!”

On day 27, the duckling started to peck away at his egg and 48 hours later, he was free

“I continued the process of turning it 3-4 times a day, spraying it with water and bringing it to room temperature, and putting it back in for a few hours before repeating the turning. I have footage of it developing over the process. On day 27-ish, he started to peck holes in the egg, and I was so excited! He was out 48 hours later when I got home from work; I am absolutely overjoyed as I didn’t think this would work at all!”

After 30 long days full of care and love, Adele finally had her baby duck with her

Adele was surprised and excited this experiment worked

This is Morris, the little duckling that hatched from store-bought duck eggs

“I was told by lots of people on a group I have joined on Facebook called ‘ducks and chucks’ that he needed a friend or he would become very sad and lonely, so because I work all day, I got him a friend from a pet shop that sells poultry, another little duckling called Beryl and they are now best friends! Beryl is a different breed. It’s a Kaki Campbell, and a bit older, but they get on so well, he’s happy with his new friend and has learned to swim lovely too! I keep them in a brood box with a heat lamp until they get their feathers, then I plan to buy a shed and get a pond put into my back yard with an enclosure to keep them safe whilst they play!”

Adele, Morris, and Beryl are very happy together and can’t wait to go on many adventures

What do you think? Is this worthy of trying? Comment below.

Fox From Berlin Gets Unmasked As A Crocs-Thief With A Collection...

30 Types Of Succulents That Look Like Something Out Of This...

These Kittens And Pups Got To Explore A Giant Aquarium And... 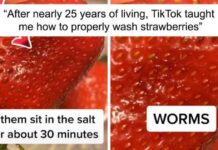 8 Celebrities Who Stopped Taking Care Of Their Body 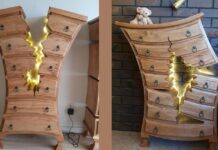 Woodworker Crafts Amazing “Broken” Furniture That Looks Like It Belongs in...