The Future Of The Earth And Earthlings Are In Question

As you probably know the amazon forest was burned in one month ago. As per the records, this year has shown the highest number of fires in Brazil after 2010. The news of the amazon fire was took placed on last month whereas mother nature loss 500 million of bees before this fire happens.

Even though the Bees are tiny, they are the insects who are giving a vast contribution to the wellbeing of the planet. Their role is pollination while helping in the agricultural sector. It is no more doubt that if these insects have vanished the survival of humanity is also in danger.

Before a few months ago Brazil lost 500 million bees in suddenly where within the state of Rio Grande do Sul the 400 million dead bees were founded.

As per the investigations, it is founded that the main reason behind this murder is the usage of chemicals which was banned in Europe.

The pathetic of this tragedy is that human is not knowing about the poisons that they used for making profits. If these chemicals can be killed not one hundred thousand or one million but 500 million insects, how much it can affect the human body.

So it is time to think again and again before taking short term decisions since the punishments of nature cannot be considered softly.

This kind of tragedies are happen in all over the wold, click here to see what happens to whales in Russia

21 Hilarious Boyfriends And Husbands Who Make Sure That Their Relationships...

People Discover A Dog 100% Covered In Tar, Work Tirelessly To... 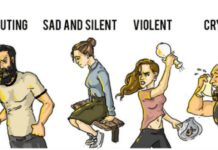 How You React in Anger Can Reveal A Lot About the...

Hilarious pictures of Great Danes and OMG how large they are!