Can a man be a good father for kids? Even if his status is on single? And far more for down syndrome kids? Yeh, the Luca Trapanese is the person who accepts this challenge even though he faced lots of obstacles.

When it comes for baby Alba, it is so pathetic that she was refused by her mother as well as 20 families who were going to adopt. The main reason behind this rejection is that she labelled as “down syndrome’’. Luca tried to adopt Alba in 2017 when she is only 13 days old while knowing that she was rejected by so many families.

The experience that he got while working in several care centers leads to take such kind of decision where he understands that it must show the helping hand for the people who need special attention and the intention of being father persuade him that it is totally fine even to be an adoptive father.

In Italy rules and regulations are strict for the taking custody of little one and especially for a single, homosexual man. Anyhow Luca success in this case where everyone felt that the Alba is one of luckiest girl in the world. As per the Luca since there are stereotypes about the fatherhood, religion and family; those facts made this little bit harder. they both spend time together where the alba converts Luca for a loving father.

Even though this child needs special attention she behaves as normal like other kids while she is good at dancing. Scroll down you may see how sweet this little angel. it is no doubt that Luca can be a good father since he has a bigger hart which everyone not has. So they get everyone’s blessing for them even us.

What did you think of Luca and Alba’s story? Let us know your thoughts in the comments section, and please be sure to share their story with your friends and family.

This Interactive Cloud Lamp Will Bring A Thunderstorm Into Your Living...

This Butterfly Is Actually A Woman Whose Entire Body Was Painted...

You Can Now Buy A ‘Half Christmas Tree’ If You Hate... 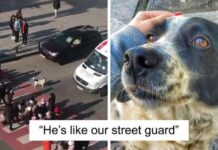 This Dog Comes Here Every Day And Helps Kindergarten in an...